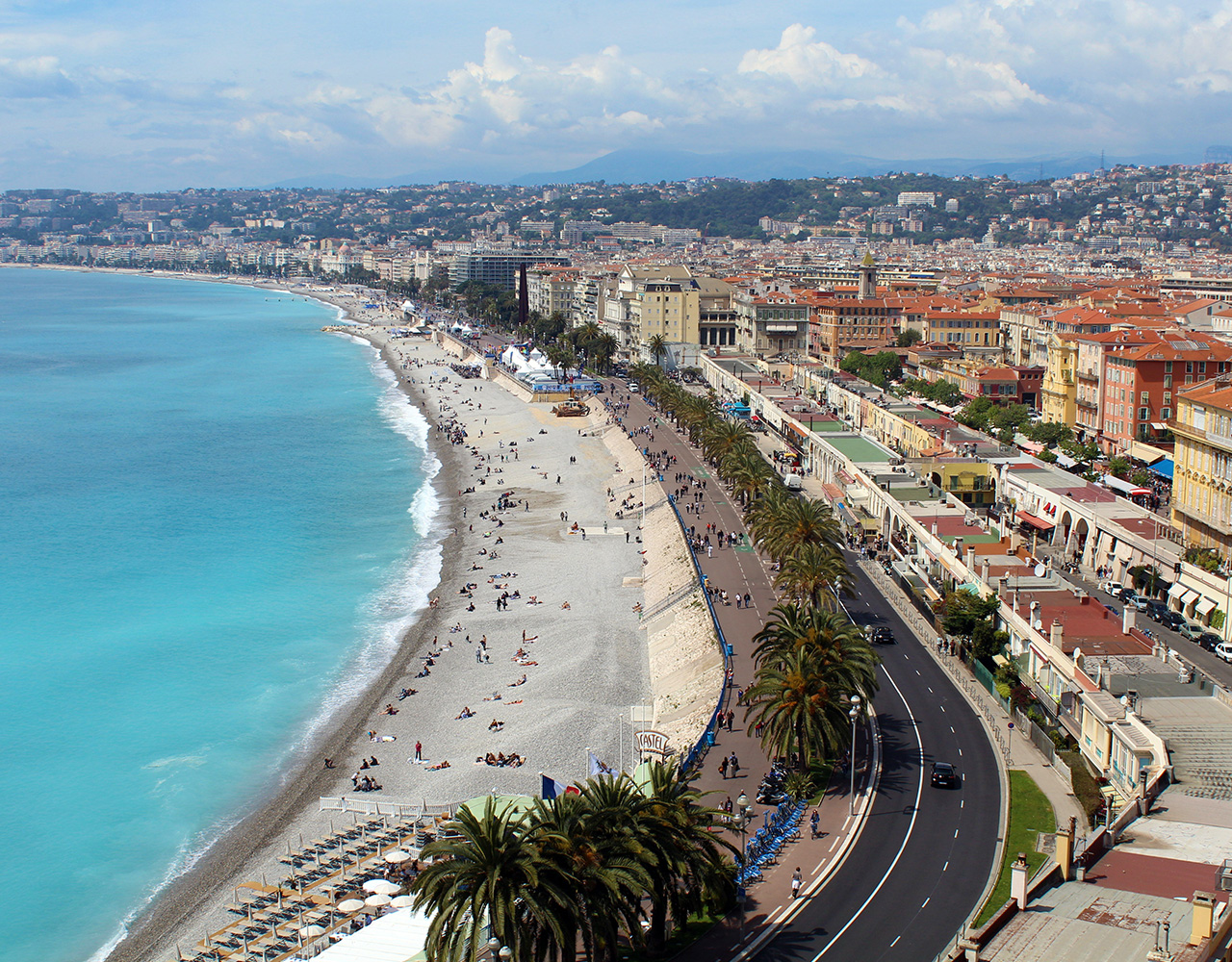 Between the sea and mountains, Nice is the capital of the French Riviera. A mix of luxury and local culture, Nice represents the tourist destination of excellence with trademark symbols like the Promenade des Anglais, the Cours Saleya or its famous carnival.

L ocated between the sea and the mountains, Nice is the capital of the French Riviera. With more than 350,000 residents, it’s the main touristic city in the province. The beauty of the city and the excellent climate makes Nice the star city of the region. Between luxury and local culture, Nice represents the perfect tourist center. We drive you from the airport to downtown Nice starting at only 33€.

Promenade des Anglais: the city's emblem
The 7 km long “Promenade des Anglais” is one of the most famous avenues in the world.
Along the seaside in the Bay of Angels, La Promenade is a delightful mix of the luxury (Hotels, Casino...) the history of the city with its pebble beaches and its magnificent architecture.

Old Nice: the soul of the city
Encompassing the “Cours Saleya”, the “Senate Palace” and the “Chapel of the Holy Shroud”, the old town represents the soul of Nice. Visiting its alleys, shops and small restaurants is an essential part of discovering the city. You will also find the magnificent “Basilica-Cathedral Saint-Marie” as well as the “Cathedral Sainte-Réparate”.

Cimiez: the rich cultural district
Cimiez is an upper-class district, located on an central hill in the city. There you can visit the Matisse Museum and the Marc Chagall National Museum, among many others.
You can also admire the remains of the Roman arenas and visit the Nice castle nearby.

Place Massena: the heart of the city
Place Massena is truly the ideal place to discover Nice.
Located between several main streets (Avenue Jean Médecin, Rue de France...) and near the old town, you can admire its architectural beauty.
There you will also find statues of characters from Greco-Roman mythology, the fountain of the sun, the Massena, Albert the First’s garden as well as many diverse activities to do throughout the year.

Nice and its events:
Nice Carnival: World-famous, this Carnival is the biggest one in France. Taking place in February for two weeks, it attracts hundreds of thousands of spectators every year. It’s the city's main event and contributes greatly to the city's reputation.

Nice Fair: Taking place in March, the Nice Fair is the number one commercial event in the French Riviera. More than 130,000 spectators come every year to discover the new products and trends in various sectors (crafts, gastronomy, leisure, etc.) presented by 1,000 exhibitors.

Jazz Festival: In July, Nice offers about thirty concerts at the “Théâtre de Verdure” and Albert the First’s garden, in the heart of the city.
The Jazz Festival celebrates the new generation by rewarding one artist/group each year.